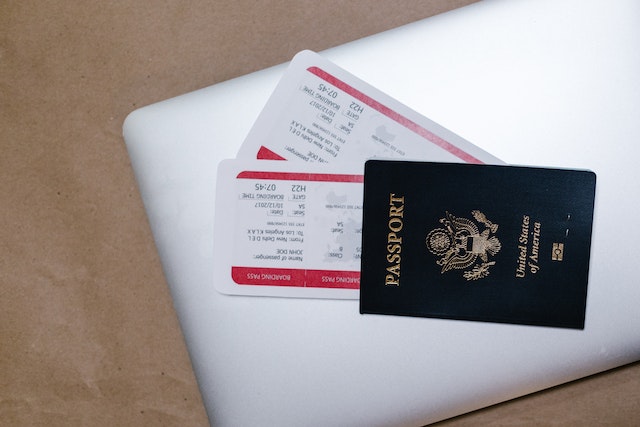 Uncovering the Reasons Why Passports Have Chips

Have you ever noticed the circle-inside-two-bars symbol on your passport? This symbol signifies the presence of an RFID chip embedded in the cover. Since August 2007, all U.S. passports have come with this chip, which is intended to deter fraud and improve security. The chip contains the same information that is printed on the passport’s data page: holder’s name, date of birth, place of birth, and other biographical information. It also stores a digital photograph of the passport holder for facial recognition purposes.

The technology behind these chips is known as e-Passports or electronic passports and it has been adopted by many countries around the world since its introduction in 2006 by ICAO (International Civil Aviation Organization). The E-passport has an RFID chip embedded in its back cover which holds all of this information securely so that it can be read quickly at border control points without having to open up each individual passport manually. This helps speed up processing times while also providing a higher level of security than traditional paper passports alone could offer.

In addition to improved security measures, e-Passports are also designed to help protect against identity theft and other forms of fraud when travelling abroad or at home. If you think you’ve been tricked by a passport scam then you can report it by emailing PassportVisaFraud@state.gov – playing it safe abroad or at home is always important!

So there we have it – now we know why passports have chips! These chips provide enhanced security measures for travellers while helping reduce processing times at border control points around the world – making international travel easier and safer for everyone involved!

What is a Passport Chip?

Passport chips are a type of computer chip embedded in passports that store biometric data such as a person’s name, photo, and other personal information. This data is used to identify and verify the identity of the passport holder. Passport chips have been around since the 1990s and have become an increasingly important part of international travel. An e-Passport contains an electronic chip which holds all the same information printed on the passport’s data page, including the holder’s name, date of birth, country of origin, etc.

A biometric passport also has an embedded electronic microprocessor chip which stores biometric information that can be used for identification purposes. The contactless chip includes a minimum amount of data necessary to store biometric identity information such as fingerprints or facial recognition scans. RFID microchips have been embedded inside all passports issued since 2007 and securely store personal contact information within them. These chips are located inside your passport cover and are identified by a circle-inside-two-bars symbol on its surface.

The RFID chip in your passport includes all your biometric data such as fingerprints or facial recognition scans which can be used for identification purposes when travelling abroad or crossing borders between countries. This technology helps to ensure that only authorized individuals gain access to certain areas or countries while providing more secure travel documents than ever before. Biometrics also help reduce fraud by making it harder for criminals to forge passports with false identities or stolen documents from other people’s passports.

In conclusion, passport chips provide travelers with increased security when travelling abroad by storing their personal contact information securely within their passports along with their biometric identity data such as fingerprints or facial recognition scans which can be used for identification purposes when crossing borders between countries or entering certain areas within them

How Does a Passport Chip Work?

Passports have been issued with embedded electronic microprocessor chips since 2007. These chips, known as RFID (Radio Frequency Identification) chips, are located in the back cover of the passport and securely store personal contact information. The chip is a contactless smart card technology that enables it to transmit information wirelessly when scanned by an immigration officer. This allows for digital versions of documents such as visas, travel documents, and other forms of identification to be stored on the chip.

The E-passport is a biometric passport that contains an electronic chip which holds biometric data such as fingerprints or facial recognition scans. This data is used to verify identity when crossing borders or entering secure areas. The same information found on the biographic data page of the passport can also be found on this contactless chip in order to ensure accuracy and security when verifying identity. Document 9303 calls for all passports issued since 2007 to include these RFID microchips in order to increase security measures taken by governments around the world against fraudulent activities related to travel documents and identification cards.

The use of RFID chips has revolutionized how passports are used today by providing a secure way for governments around the world to store personal contact information while also allowing them access this data quickly and easily through wireless transmission technology when needed at border crossings or other secure areas where identity verification is required. With these new technologies being implemented into passports, travelers can rest assured knowing their identities are safe from fraudulent activities while they explore different countries around the world without worry about their safety or security being compromised due to outdated methods of identification verification used in years past before RFID chips were introduced into passports worldwide.

What Are the Benefits of Passport Chips?

Passport chips are a secure and efficient way to verify a person’s identity. The chips, which are embedded in the cover of all passports issued since 2007, contain a unique identification number and digital signature as protective measures. This circle-inside-two-bars symbol signifies the presence of an RFID chip inside the passport. The data stored in these radio chips includes all printed information on a U.S. passport such as name, date of birth, place of birth and digital photograph of the holder. All e-Passports issued by Visa Waiver Program (VWP) also require that this chip contain biometric information such as fingerprints or iris scans for added security measures.

The benefits of having passport chips are numerous; they make it easier to process travel documents and reduce time spent entering countries while providing tamper proof protection against unauthorized alteration or modification attempts. Furthermore, these microchips strengthen document security and our ability to verify travelers’ identity which is essential for preventing terrorists from gaining easy access to America. Passport chips provide an extra layer of security that helps protect citizens from identity theft while making international travel more convenient than ever before!

What Technology is Used in Passport Chips?

Passports have chips that use Radio frequency identification (RFID) technology, a type of wireless communication that uses radio waves to transmit data. This technology is also used in credit cards, driver’s licenses, and other forms of identification. RFID tagging involves small devices that use radio frequencies to transfer data for the purpose of tracking and identifying objects, animals and people. An RFID system consists of tags attached to objects which are read by an RFID reader using electromagnetic fields. It is also used in stores as a tracking system with intelligent bar codes on smart labels. In addition to its use in passports, RFID technology can be embedded into digital information such as smart tags and security badges for contactless payments or access control systems. Furthermore, it is used in health care settings for patient identification or asset tracking purposes. All these applications demonstrate the versatility of this technology which makes it an ideal choice for passport chips due to its secure storage and transmission capabilities.

In conclusion, passport chips are an increasingly important part of international travel. The chips use RFID technology, which is a type of wireless communication that uses radio waves to transmit data. This technology provides a secure and efficient way to verify a person’s identity and helps to process travel documents more quickly. Radio Frequency Identification (RFID) chips are microchips that store information securely and have been used in different products for many years. These chips are embedded in the cover of passports with the circle-inside-two-bars symbol signifying their presence. RFID tagging involves small devices that use radio frequencies to transfer data, mainly for tracking and identification purposes. An RFID system consists of tags attached to objects which can be identified and tracked using electromagnetic fields automatically. This technology provides an efficient method for identification and tracking capabilities by using wireless communication to transmit data securely. Passport chips provide a secure and convenient way for travelers around the world to verify their identity when crossing borders or entering new countries, making them an essential part of modern international travel today.